Everyone were really “kancheong” this morning. We have a long day ahead and the top most agenda was to catch the 7.11 am train from Subang Jaya to Klang. Despite Claudine and VT arranging to lead Joyce, Jac, Mr Tan, Mr Lim and KC to the commuter station, all had left Subang Valley Hotel even though the duo arrived at the agreed time of 6.30 am. Seems like the latter group had gone ahead in search of takeaways which they only found at the commuter station. If they had known, they would have invited them to join the canai and teh tarik session 50 m away from their hotel.
Seems like many in the group were not paying attention in the group chat. They failed to bring their Touch N Go cards or topped up cash in their new Identification Cards which comes with the same. While the senior citizens were allowed to purchase tokens on Warga Tua rates of half the actual fare, those without the relevant cards had to purchase KTMB’s cards with a non refundable deposit of RM10, topping up an additional RM3.70 for the actual fare. Perhaps, a conniving marketing strategy by KTMB on Merdeka Day, for all ticket machines were coincidentally out of order!
Waiting for our train at the platform, we stepped into the first train that arrives only to realize it was heading for KLIA!!! Thank goodness an officer highlighted our mistake to us and so the retreat commenced! 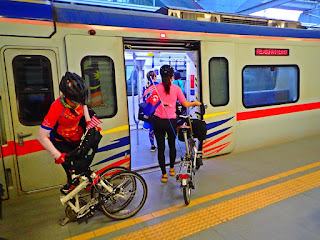 Seems like the early commuter train was timely and before long, we were transported to Klang Sentral. Once we got off, we had to wait a few minutes for Sasee to arrive and even longer for him to set up his bike. Then, we were off... 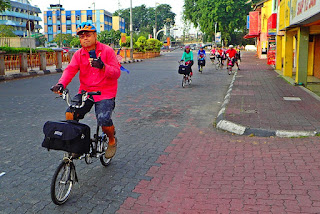 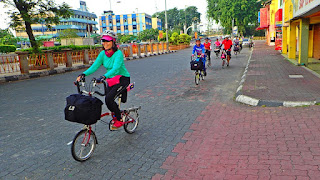 Riding through the streets of Klang was a horror! Cars seemed to be in a hurry and reluctant to stop at junctions. Thrice, they threatened to run us down!
But there were amusing moments when we spotted a transsexual, hoping to get “picked up"! We secretly wondered if she had been working throughout the night!
Passing by Restoran Boston Baru on Jalan Kapar also brought back memories from our 2017's LTF BKT Melaka to Klang ride. Back then, the ride had ended there with a dinner meeting with Legends Mike Khor and Jotaro Zen. 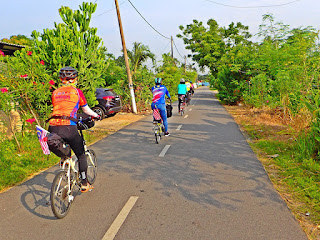 Soon, we were riding on Jalan Keretapi Lama, an old railway line from 1913 which used to run from Klang's Connaught Bridge all the way to Kuala Selangor. The tracks have since been removed and the remaining visuals of a past history is the relatively straight route.
Federal Route 5's Jalan Kapar runs parallel to Jalan Keretapi Lama. Whilst Jalan Kapar is a busy lifeline, the latter was a quiet road on National Day, running past many small and medium industries; notably, paper recycling center, "kereta potong", plastics and autoparts.
At Kampung Perepat, we tried crossing Sungai Kapar Besar but the crossing shown on Google Maps was no longer there. It must have been removed as the river was going through a dredging process. The first 20 km of the ride was hot, humid and boring. When we saw the first gerai near U Panel Furniture Industry, we steered happily into it, grateful for any random change! 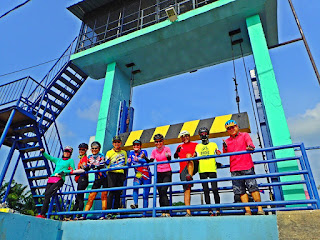 Closing in on Pantai Remis, we came upon our first water gate at Sungai Janggut. Surprisingly, there will be many more to come on this tour. Nearby is a small Chinese temple with immaculately kept grounds but we did not have time for another stop knowing we have a long journey ahead. 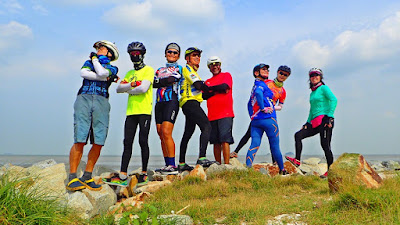 Before long we arrived at Pantai Remis, a short strip of sandy beach so close to the Capital city. Despite the food court, stalls and a few sea front accommodations, it was not attracting the crowd it deserves especially on a national holiday like today. 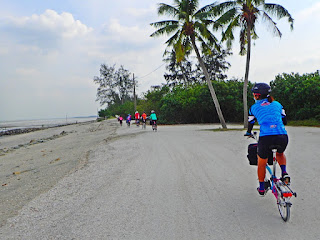 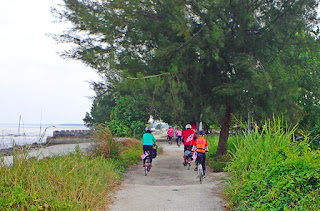 Following the route that ran past the few stalls on the strip, we soon found ourselves out of tarmac and were rolling on the beach instead! The sand was soft and the wheels were taking a lot of effort to turn. Thankfully, it was a short strip but our cheers did not last... 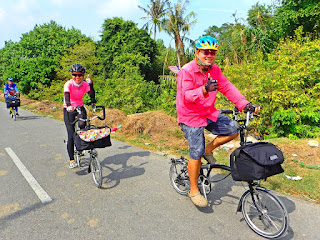 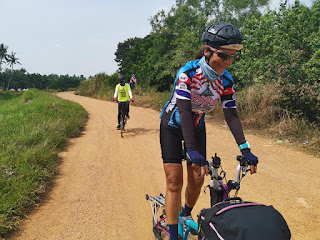 After a short distance on tarmac, we entered a dirt path. Initially, we passed a few open dumpsites. Later, we spotted the back end of a village bordered by an inlet filled with black brackish water. A few wooden makeshift bridges lay across the inlet, allowing the villagers to cross over.
All along, the sea front was eclipsed by vegetations. Not realising, we had slowly steered away from the sea... 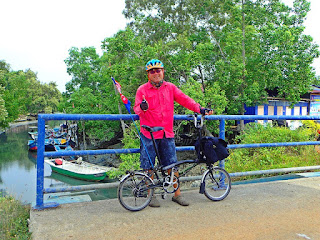 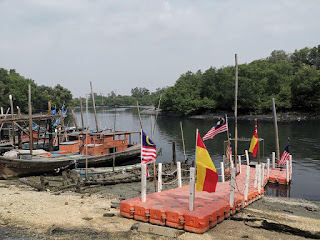 Thus the second water gate caught us by surprise for we had found our way to a river estuary instead! A bigger surprise were the 2 tour buses parked a little ahead with its passengers gone for the popular sky mirror photography, a current craze!
Following the route where the bus had come in from, we were relieved to be riding on tarmac again. Looks like tourism had brought newly paved roads to the small Chinese village though it remained a single lane passage. 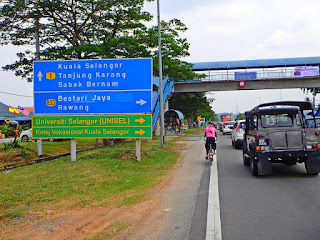 Back on the main road, heading for Kuala Selangor traffic was beginning to build up. The Merdeka spirit was high on the road with many groups flying the Jalur Gemilang proudly.
Soon we rolled into Kuala Selangor, once a royal town. In fact, the first 3 Sultans of Selangor were buried high up in Bukit Malawati where the ancient fort from the early 18th century was built to fight invasions. When the Dutch eventually took over Kuala Selangor, the Fort was renamed Fort Altingsburg; after its governor of the time. The lighthouse from 1907 is a replacement of the old one built by the Dutch.
Enroute to Sekinchan, our horrors began. Beginning with a tyre puncture on Mindy's bike, Jac, VT and Sasee suffered the same fate not long after! This delayed our arrival in Sekinchan. 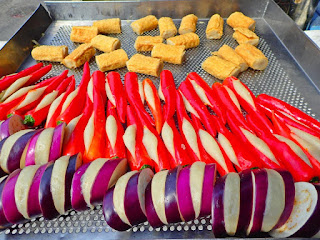 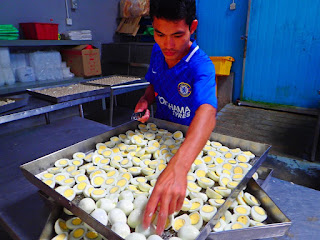 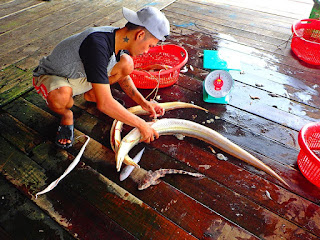 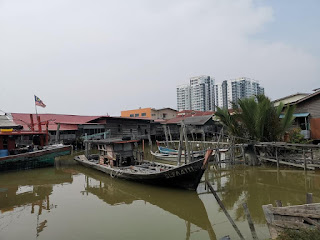 As most coffee shops were closing up at 3.30 pm, we made our way to Dong Xin Trading; a shop in the fishing village side of Sekinchan that manufactures fishball and Yong Tau Foo. They also retrade salted fish, ikan bilis and keropok made in the nearby cottage industries. 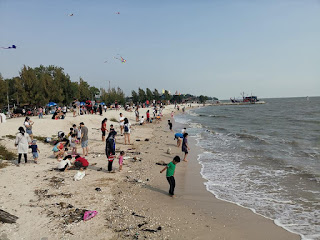 After a short visit, we moved on to the ever popular Pantai Redang, famous for its wishing tree and Chinese temple. As the place was a total chaos, we only stayed long enough to finish our lunch, taken at a time when most people were having tea! 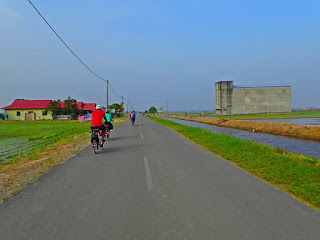 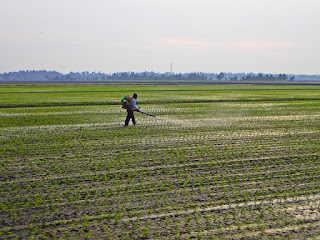 Enroute to Teluk Intan, we made a side tour to Sekinchan's paddy fields. It was the planting season and paddy shoots from the nursery were being replanted in the fields filled with water. As the water gates were opened to irrigate the fields, the flow of water brought along fishes which attracts the cranes as well!
The evening ride towards Sabak Bernam was a calculated one. We were trying to ride as far as we could with the remaining daylight. Plans to take the local ferry at Hutan Melintang had to be cancelled knowing we cannot reach there on time for the last ferry.
It was admirable to note everyone's determination to finish the ride. Nobody took up the offer to throw their bags in the support car despite the tempting offers made at Kuala Selangor and Sekinchan, let alone to quit. Even though Sarah had said she wouldn't mind lightening her weight in Kuala Selangor, she was even more determined in Sekinchan saying she came to ride and she will finish it. Even Sasee, who was showing signs of defeat in Sekinchan did not crumble when May offered him a ride in the car.
The route from Sekinchan to Sabak Bernam was an unpleasant one. The ongoing roadworks for WCE meant many sections of Federal Route 5 is reduced to a two lane road going in opposite directions. Thankfully, with dusk setting in, traffic was thin and bicycles could squeeze in and out between the barriers set up to keep off the newly tarred roads from vehicles. In a way this gave us a safer passage.
Sungai Besar's McDonald's was tempting. So were the many eateries around Sabak Bernam. But everyone sensibly chose daylight savings instead.
We finally made a stop for dinner as the last streak of light was about to leave our longitude. But none of us had the appetite to eat much, our stomachs filled with too much water. 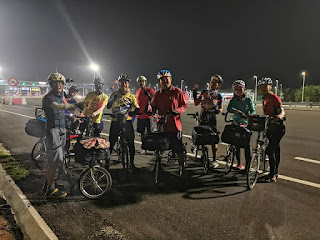 The last push for Teluk Intan was hilarious. Riding in the dark, none of us noticed the signage for Route 5's Teluk Intan. We only realized our mistake when we saw the Hutan Melintang toll plaza in front of us. By then, we were too tired to turn back.
Taking a big gamble, we went ahead knowing it was against the law. Entering through the motor lane, we were surprised no staffs were present at the toll plazas. But then again, it is opened on a trial run and have not started collecting toll. 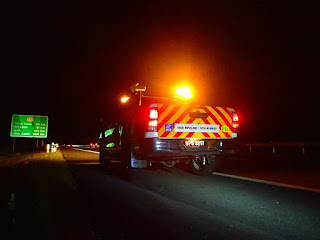 However, SOMEONE IS WATCHING and before long, Mior pulled us over in his pick up truck. Oops!!!


He must have taken pity on us for he allowed us to continue our journey with only words of advice. After all, the hour was late and to ferry us or escort us to the end of the line was against his SOP. Besides, it was a genuine mistake as Google's walking route had led us on.

Riding on the WCE was very enjoyable. The cool night air rejuvenated us. Traffic was low and we felt safer on a highway, not having to worry about pot holes.
In the beginning, the Royal Malaysian Air force kept us in check with their fleet of transport planes. Later, swarms of dragon flies danced along the route from Pantai Remis to Sekinchan. But it was the stars that lit up our way during the night, guiding our caravan of cyclists all the way to Teluk Intan. 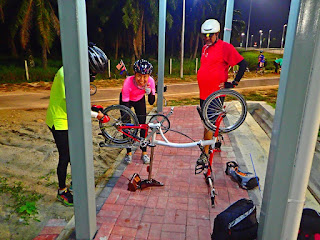 "Objects in mirror are closer than they appear"
But in our case, the Teluk Intan toll plaza took forever to arrive!!! When we finally reached the end, our short rest extended to a long rest with Sasee's bike taking another hara-kiri! 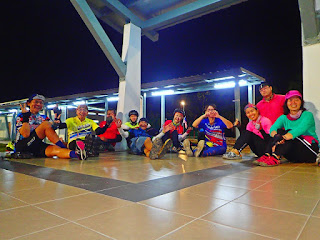 Teluk Intan toll plaza was not the end of the road. We still had another 15 km more to our hotel. Just as this morning, the night continues to bring moral support from passers by, if not more!
Our spirits lifted when we saw the signboard for Teluk Intan; 3 km to the heart...
...and then we turned left and away from the heart!!!
Initially nobody protested. But when we appeared to be moving further away from developments, we began to question the lead rider.
Racing forward to speak to Mindy, Claudine asked if she noted the hotel to be far away from the town. When she confirmed not, Claudine raced to VT to double check. Frustrated, he showed her the map and they were on track with another 1.5 km to go!
20 minutes before the stroke of midnight, before our rides turned into pumpkins, we finally arrived at Merge Summit hotel. It was a comfortable stay with a 24 hours mamak right across the road. What a good way to end a very very long day...
* from 6.30am, meet up to 11.40pm, end of ride
* 160 km distance
* 5 Brompton rear tyre punctures