Merge Summit Hotel is just 2.5 km away from The Leaning Tower of Teluk Intan. As the first order of the day was sustenance, we rode straight to the town center in search of food, riding through the morning market and alongside the river. The Tower will have to wait!

Arriving too late for Liew Kee’s famous chee cheong fun, we made a beeline to Seong Fatt coffee shop instead.  Seong Fatt’s prawn noodle was drawing a steady crowd when we were there and we couldn’t complain knowing very well all the town’s famous chee cheong fun stores are only opened at night; spilling over to morning, if there are any leftover! Moreover, we were delayed by a tyre puncture even before the ride began. Somehow, VT’s bike had miraculously survived the night but all magic was lost at the stroke of midnight! 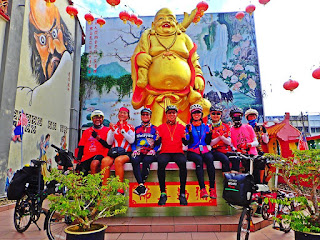 After breakfast, we began our sightseeing tour of Teluk Intan. Starting from the riverside jetty, we slowly made our way to Keong Temple and then, The Leaning Tower. 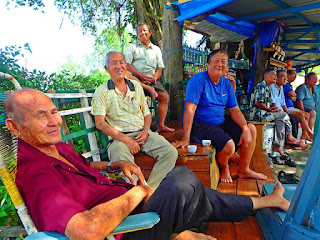 The riverside scene was a sleepy one, dominated by senior citizens. Even the boatman who plies his RORO across the river is wrinkled and old. The night scenes may be livelier, judging by the wide array of hard liquor displayed by the window of the makeshift stalls!

Striking a conversation with the town’s folks, we found out to our delight, a connecting dirt route to Lumut! Instantly, we unanimously voted to change our route but not before taking in the sight of the famous tower. 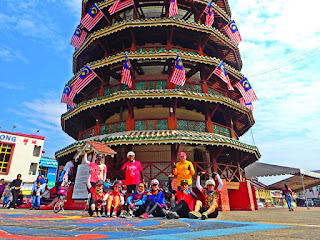 The Leaning Tower of Teluk Intan has an equal charm inside and out. Built in 1885 as a water tower, it once served as a watch tower for the Japanese Imperial Army during World War 2 before becoming a clock tower and assuming it’s present day status as a National Heritage. Adopting Chinese architecture due to the town’s mainly Chinese ethnicity, the tower resembles a pagoda. 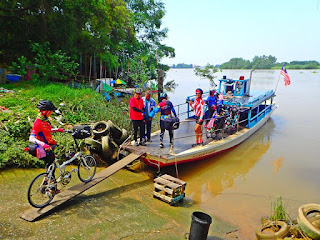 After The Tower, we returned to the riverside and embarked on our journey across the river. Other than a small shack built for motorcycle parking which comes with a small stall peddling cigarettes, some sweets and bottled water, the other side of the riverbank is mainly farmland with a fruit orchard nearest to the jetty. Beyond are all palm oil estates. 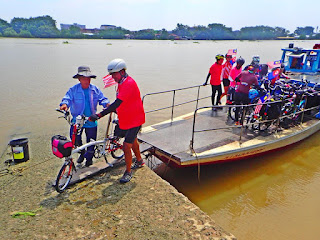 Coming off the jetty, the first 200 meters of the route is on single lane tarmac. Where the road forks into 2, we followed the boatman’s instruction, taking the route on the right which only comes with dirt tracks. Tempted by the left fork which saw a beautiful strip of tarmac, we quickly made a U-turn but this soon disappeared as well! Forced to make a second U-turn when the road became overgrown with long weeds, we finally resigned ourselves to riding on dirt, gravels and pot holes for a whole 12 km!


The route was not entirely remote. There was an estate worker’s quarters at Ladang Sabrang, close to the river bank. We also passed by a few motorcyclists along the way. 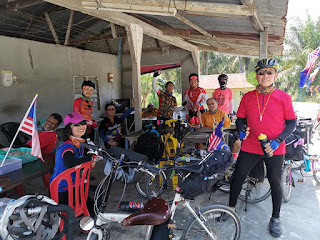 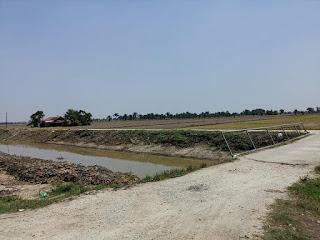 Arriving at the junction to A18, we were so happy to see a stall by the roadside. It felt good to be back to civilization. This time, the landscapes were one of sweeping paddy fields, white cranes and quiet kampung roads. 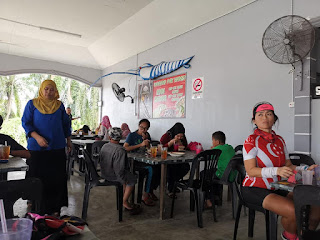 The heat was beginning to build up and we were soon hungry. 7 km later, we connected with Federal Route 5 and decided to stop for lunch at Warung Pak Hamid which specializes in udang galah. The fresh water lobsters can cost as much as RM22 each, so do be careful what you heap onto your plate! Feigning a shocked look can help reduce the price tag as what VT found out. He had assumed, “Dua Dua” meant RM2.20 !!!!

After lunch, our torturous ride began. Federal Route 5 was undergoing roadworks, in transformation for West Coast Highway. Traffic was heavy on a long weekend made worse by roadworks. As there were no road shoulders, we had to tread carefully, fighting for space and weaving around potholes. We were rattling a lot too as the tarmac was bare and worn.

On our first break, we gate crashed in a small government complex by the junction to Kampung Kayan. We were so hot, we drenched ourselves with the garden hose by their living quarters.

On our second break, we stopped for tea by a roadside stall offering pisang goreng and chendol. While the rest of the team trickled in within minutes, the last 2 persons took forever to arrive…

Sasee, who had a slow leak on his inner tube was with Mindy! They tried to pump up the tube but it turned flat after a few kilometers. They tried a second time and it went flat again short of 1 km from the rendezvous. Not knowing where he was, we even suggested for him to take a Grab to Marina Island Jetty Complex to meet us. 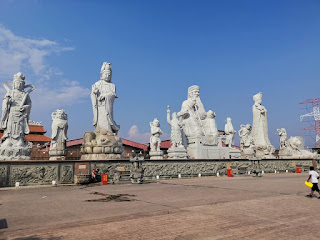 Thankfully, Sasee prevailed. Under Jac’s leadership, we drew up a last minute plan to move the bigger group off to Tua Pek Kong Temple leaving Mr Tan, Sasee and VT to tube changing. They were allowed a 10 minutes breather at the temple before the final push to The Marina.

We were targeting the 7 pm ferry. Arriving with ample time to spare, we made the mistake of buying water and beer. It was totally unnecessary as the island has a lot of convenience store with competitive prices.

When the ferry finally arrived, we were not allowed to board. It was a long weekend and hoards of tourists were waiting to get off the island. To help ease the congestion, the ferry returned to the island for a second trip!

Thus despite the ravings about punctuality, we only got on the ferry at 7.30 pm. Thankfully, the journey was a mere 10 minutes. 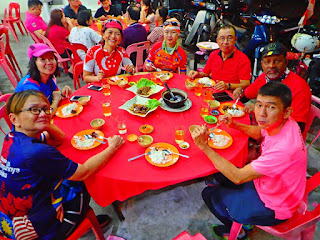 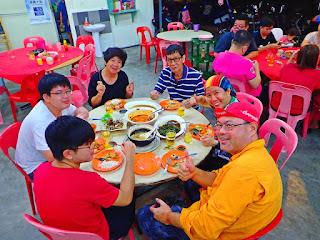 Arriving in Pangkor, we made our way to Chao Seng Seafood Restaurant. The wait for dinner was almost one hour but the reasonable price made up for everything. After that, it was time to unwind at our little haven for the next 2 nights!

Note : There are 2 ferry services for Pangkor. One is via Lumut while the other via Marina Island. Both services will dock at Pangkor Island Jetty. While both fares are the same, Marina Island's ferries are known to sail on time and are not governed by the tide. Travel time via Marina Island is 10 minutes while via Lumut is 30 minutes. Remember to keep your ticket as the RM14 ticket includes your return journey. If you decides to take the Lumut ferry on your return, you can buy a separate ticket at RM7 at Pangkor jetty. This one way ticket is only available on Pangkor's side. Parking at Marina Island is open spaced and well managed by Secure Parking. Rates are on hourly basis and not per day. 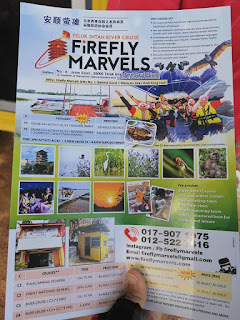 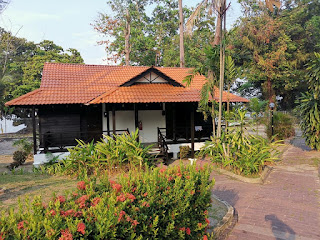 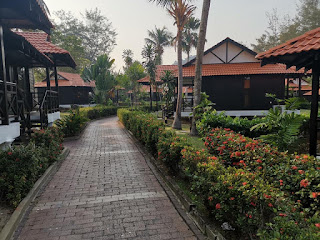 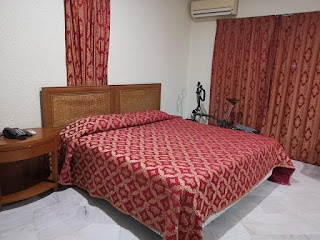 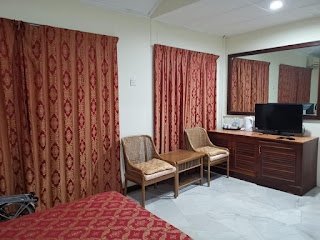 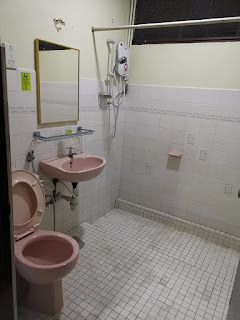 
My first cycle tour was done on a Tern D16. The bike was literally bought so I could follow Love the Fold to Batam and Bintan. Back then, all foldies went into the cabin while the sole, full sized bike was strapped to the deck, held down by ropes. I never looked down on foldies ever since that trip.

So when I was offered a price I could not resist, I bought my first Brompton on 26 July 2016. The very next day, VT and I returned to the shop for another one !!!

It was not an instant love affair. The bikes were hardly used for the first 5 months. I found it heavy and I kept forgetting the steps to fold and unfold!

It was only after I took it to Fraser's Hill at the end of the year, that my love for 16 inch wheels actually began. Yes, it is doable though with many out of breath stops!

Ever since, I have taken it on 120 km and 160 km distances without much body aches, thanks to its steel frame. So what if the gradient is too much? Get down and push the bike!

The bike is so compact it had saved us in many awkward situations. Bag it and travel as luggage on public transports. Roll it under the table in small restaurants. It can even be stored under the bed! 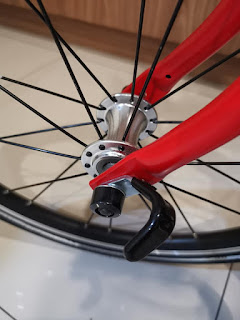 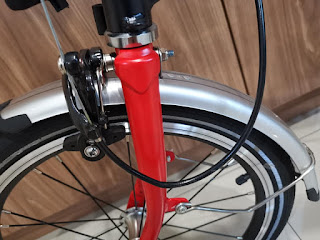 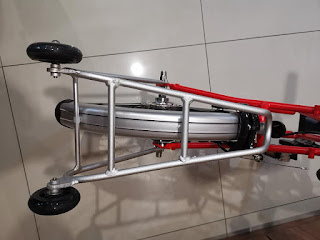 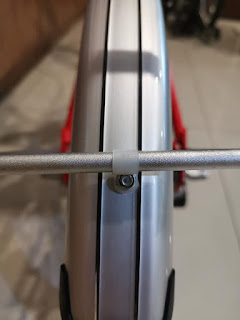 The bike comes assembled but it is NOT road worthy. The bike mechanic took at least an half hour going through the whole bike from wheel alignment to tuning to ensuring every screw and nut is in place.

The folding and unfolding of the bike is a tad stiff. Not sure if the joints need to be lubed but will certainly  into this further.

Riding wise, the positioning differs slightly from the Brompton but having said that, I can't give a direct comparison as my Brompton is on P while VT's is on H handlebars. Comparing to 3 Sixty's straight handlebar stem, the Element Pike's ride positioning is the closest to a Brompton.

The Sturmey Archer X-RF8 (W) hub comes with a wide gear ratio of 325% with the middle 6 gears evenly spaced at 14% apart. There's a 30% jump between gear 1 to 2 and 7 to 8 which are supposed to rescue your leg muscles during those steep climbs and adds a boost during the descents.

I am saying "supposed to" because I was using gear 1 (strangely built on direct drive) for flat roads! Switching to gear 2, I could feel the immediate jump in loading, required to turn the crank. Duhhhh....at this rate, I will never hit gear 8!

I only began to appreciate the hub on Day 2; during my short 10 km ride through killer traffics and narrow backstreets of Jakarta. The gear shifts were smooth, the little monitor helps me keep track on what gear I was on and any gears can be selected while stationary. I could feel the transfer of power and the bike propelling forward after gear 3 which is such a joy on so little effort. It also helps that all 8 gears are in sequence so gone are the complications with the twin-shifter system as in most 6 speed Bromptons. Having 8 gears in an internal hub without a derailluer also reduces maintenace as well!

The hub is said to be noisy but it wasn't drowning the noise on the busy streets like I had hoped it would! Jokes aside, it was slightly more audible than the S-RF3 but nothing too disturbing. Anyway, I do not think it was a fair comment as its like comparing between a M26 and M67 hand grenade. Besides, our gentle giant weighs a whopping 1.5 kg!!!

The Sturmey Archer thumb shifter comes with 2 levers. The longer shifter reduces the gear while the little one behind it is for loading. Both requires an outward push to click which was a bit complicated even for a girl's hand. Both aligned together, I have to feel my way behind the longer shifter every time I want to increase my speed. What happens if someone has a big thumb?

Riding wise, the chromoly frame absorbs the rattling quite well. The grips with wrist support was a joy and you can't help smiling from ear to ear for such a STEAL !!! 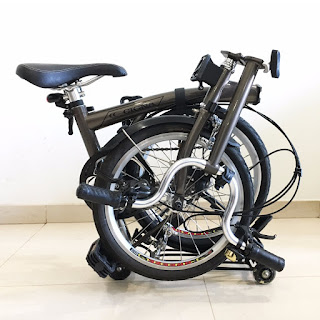