The Penang Hill challenge had not been well received ever since we landed on the island. Penang is after all "THE destination", "THE end" of the tour and another hill is seriously nauseating after attempting so many along the way!
Thus, Claudine was pleasantly surprised when almost everyone had a change of heart this morning. Perhaps, the late morning start and a hearty breakfast of lo bak, char kueh tiau and prawn noodle at Kafe Ping Hooi were the necessary boosters for the trip!
Riding out, traffic came to a standstill along Jalan Kebun Bunga. Devotees swarmed the many Hindu Temples along the street. It is New Year's Day 2021 and a devotion to Lord Ganesha, the God of Beginnings is necessary for his blessings to begin the new year on positive notes!
Weaving through the chaos, we quickly got to the Botanical Gardens roundabout. While VT was leading all the way from the hotel, Claudine had to take over, here on, as we were unsure if cyclists were allowed up the Penang Hill road which is manned by JKR with a boom gate across! Exchanging salutations with the men on duty, all 10 of us rode past the JKR office...
The "WALL" was immediate!!!
Claudine, who was just ahead found herself breathing labouriously almost instantaneously. Right behind her, loud exclamations could be heard. Turning her head to check on the others, she saw many had stopped and a great discussion ensued.
Out of breath only 100 m later, she too, put both her feet down. VT who was right behind her caught up to inform that half the team had abandoned the challenge!
Basically, the climb to the peak on tarmac is about 5km. As most of our bikes are heavily built for touring with racks, they weighed a whopping 14kg to 19 kg. Couple that with no granny gears, we found ourselves pushing our bikes on foot more than riding!
After the first 100 m, the gradient averages about 17.9 %, a near impossibility for those of us coming from flat flat Johor! We found ourselves riding again after Station 46.
The 1 km distance between Station 46 and Station 84 is possibly the most rideable part of this hill slope. A nasty hairpin bend welcomed us after Station 84 with a whopping 24.9%  grade hill. It was difficult even on foot! Thankfully, we only had to endure this for 330 m as our calf muscles were screaming throughout the struggle.
Based on our riding standards, there were 2 other rideable segments. Both these short distances, began from the 3.2 km and 4.4km markers to the peak.
Naturally, the road builders have to ensure a sweet struggle to the peak. The last 300 m at 17.4% grade hill with sapped energy, hunger and thirst is but a lasting bitter sweet memory!!! 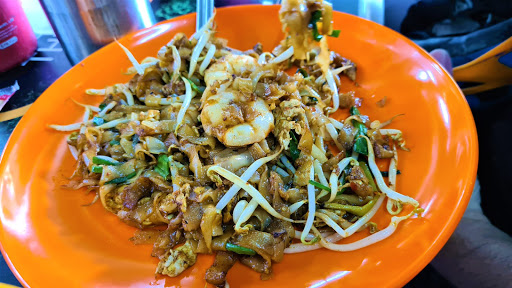 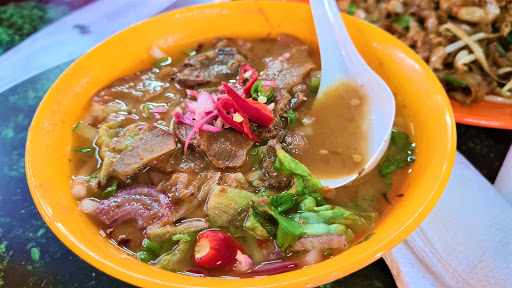 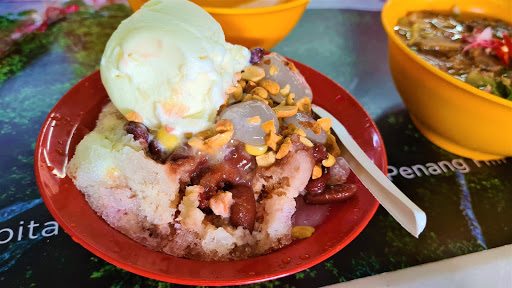 Just as promised by our friendly couple, hiking with their young daughter on foot, the ice kacang, char kueh teow and laksa at the peak really lived up to their names. It was after all, a motivating factor for all of us who had started to feel hungry and would never have been able to complete the climb had Mindy not generously shared her egg tarts with the Team! She is after all, a real scout....always prepared....with food....be it char siew pau, gardenia buns and in this case, egg tart!!!
The descend was just as slow! Many of us pushed our bikes down most of the way except for Mr Lim. Either he had full confidence of his new brakes which was just replaced at Chin Aik's Lebuh Carnavon or he was deluded to believe he comes with super hero strengths! This brave man was waiting a good 30 minutes for us at the foothills!
As for Claudine, brake as she might, the bike was still skidding down the slopes! On foot, her bike has a life of its own, rolling down even when she was pressing down on the brakes!!
Midway on their descent, Claudine and VT were particularly stunned when a 4WD overtook them with Amy waving her support from the front passenger seat. Seconds later, the truck had stopped and she was jumping out of the vehicle to pick up her sunglasses that had fallen off during her cheerleading stunt !
This resourceful woman had hiked up to the peak all alone, via the trails. Her hiking companion, Chooi, had to abandon the hike halfway due to a stomachache. Henry who was with them had decided to follow suit. 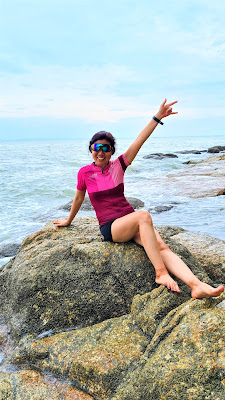 When we finally regrouped again, Simon and Cindy were long gone, returning to the hotel on their own after their visit to the Botanical Gardens. As the remaining group, we rode to Shamrock Beach at Tanjung Bungah, braving the crazy holiday traffic for tea and a short dip in the sea.
Before returning to our hotel, we took a detour to Gurney Drive. The landscape has since changed with land reclamation works. The sea was way out from the road and the fences set up, had blocked the views of the sea! 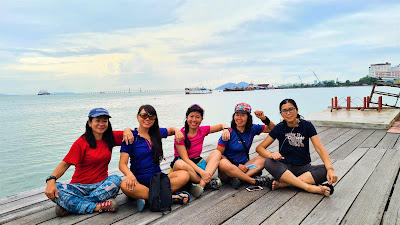 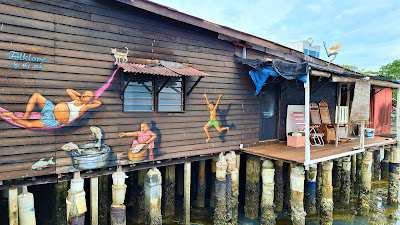 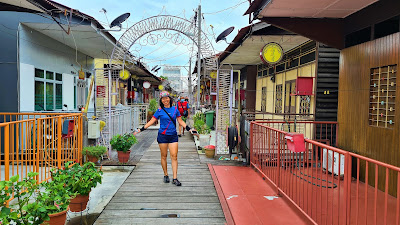